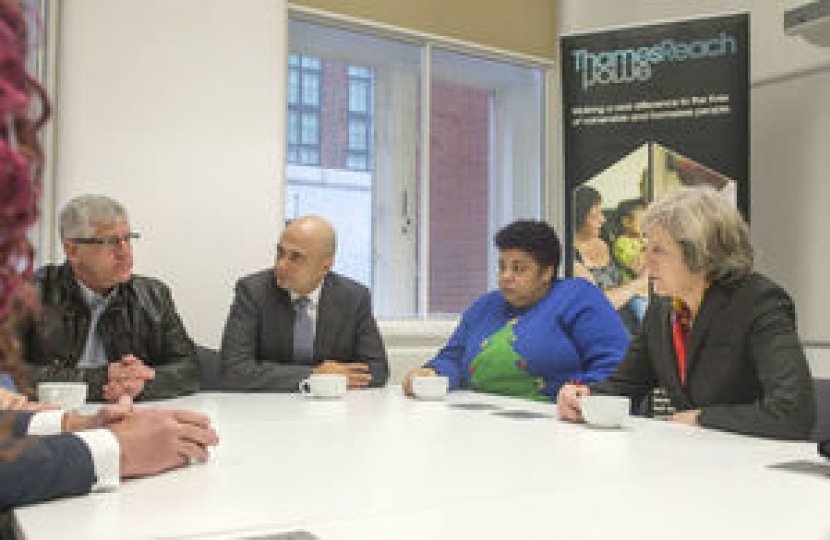 The Prime Minister has unveiled plans for new homelessness prevention schemes, including targeted support for those at risk of sleeping rough.

Prime Minister Theresa May and Communities Secretary Sajid Javid today provided a £50 million funding boost for trailblazing new homelessness prevention schemes across the country, including targeted support for those at risk of rough sleeping.

On a visit to Thames Reach Employment Academy in Southwark this morning, Theresa May and Sajid Javid announced details of winning bids set to benefit from the total £50 million government funding announced earlier this year.

The successful proposals submitted by local authorities include plans for improved collaboration between different agencies to better identify at risk households, targeting interventions well before they are threatened with eviction.

In the run up to Christmas, images of soup kitchens and hostels remind us of the vital lifeline provided by charities and local services to those facing a night on the streets.

But today I have witnessed a different kind of support, one which seeks to stop people ending up on the street altogether by providing assistance to address their most immediate needs and crucially giving them the skills and opportunities which can help them build a more secure future for themselves.

Services like those I have seen today are vital in helping everybody realise their potential, no matter what their personal circumstances as we create a country that truly works for everyone.

The work that Thames Reach does to tackle homelessness shows the wide range of services that the most vulnerable people in our society often need. Their efforts are proof of the real difference that can be made when charities, councils and volunteers work together.

That’s why we’re making this £50 million funding available across the country this Christmas for ambitious programmes to prevent homelessness in the first place, so that by next year many more people will have been helped to get their lives back on track.

Birmingham has been given a £1.7 million boost to prevent homelessness which could help up to an additional 9,000 people by tackling the root causes that can lead to someone losing their home. Proposals include a new Partnership Board to take responsibility for homelessness services across Birmingham, new dedicated teams to support vulnerable people leaving custody and hospital with no fixed address, and specialist early advice through Web chat, Skype and phone calls for anyone who thinks they might be at risk of losing their home.

Brighton have been awarded £352,344 to fund a Dual Diagnosis worker to support rough sleepers with both substance misuse and mental health needs, and a navigator worker to help those new to the streets or experiencing hidden forms of homelessness to get the emergency accommodation and support they need.

Eight areas will benefit from a share of £10 million in locally commissioned Social Impact Bonds to help long-term rough sleepers with the most complex needs.

Housing First is based on the principle that housing is an individual’s primary need, providing permanent accommodation for those currently sleeping on the street before addressing wider support needs. Pilots will form part of a wider evaluation of how a similar approach could be implemented in the UK, as part of a fresh approach to tackling homelessness.

Funding grants to local authorities will place a focus on better prevention, so that more people receive help before they reach a crisis, increased early intervention to get rough sleepers off the streets quickly, and greater specialist support for entrenched rough sleepers.

The new programme builds on the government’s commitment to preventing homelessness, which includes:

A full list of funding allocations can be found on GOV.UK.