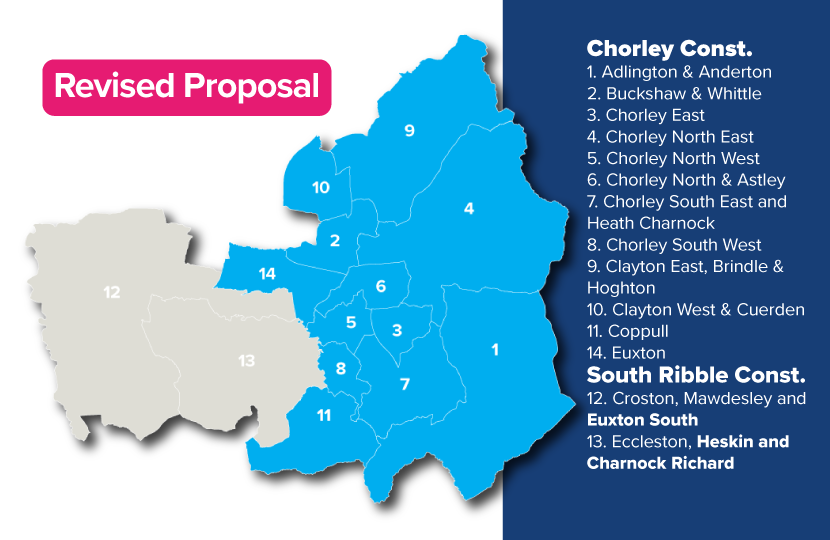 The Boundary Commission for England has proposed new parliamentary plans for Chorley following a consultation earlier this year.

In a bid to reduce the size of the constituency to bring it in line with others, the Commission first proposed that the two Council Wards of Adlington and Anderton and Chorley North East Ward should form part of a new West Pennine Moors constituency, and return Bretherton, Croston, Eccleston, Mawdesley and Ulnes Walton back into a revised Chorley Constituency.

But now, following views from local communities and neighbouring constituencies, the Boundary Commission is now consulting on retaining Adlington and Anderton and Chorley North East Wards, and instead transferring Charnock Richard, Heskin, and part of Euxton (currently known as the Euxton South part of Croston Mawdesley and Euxton South Ward) over to a revised South Ribble Constituency.

If approved. the whole of the two Council Wards of Eccleston, Heskin and Charnock Richard and Croston, Mawdesley and Euxton South would be in the revised South Ribble constituency, whereas currently they straddle the two constituencies,

The final outcome is due to be known in June 2023.

QUESTION I live in the Croston, Mawdesley and Euxton South Ward. Does this mean I'll come under South Ribble Borough Council for my local services and council tax?

Over 11 million pensioners across the country will receive an extra £300 as part of their annual Winter Fuel Payment this month as part of the Conservative Government’s £49 billion package of cost of living support.

Why Parliamentary boundaries are changing:

Application of statutory rules means that all recommended constituencies must have no less than 69,724 Parliamentary electors and no more than 77,062 (except those ‘protected’ constituencies). By law, these electorate figures relate to the electorates as they were on 2 March 2020.