Brinscall's Sandy Lane a step closer to a resurface 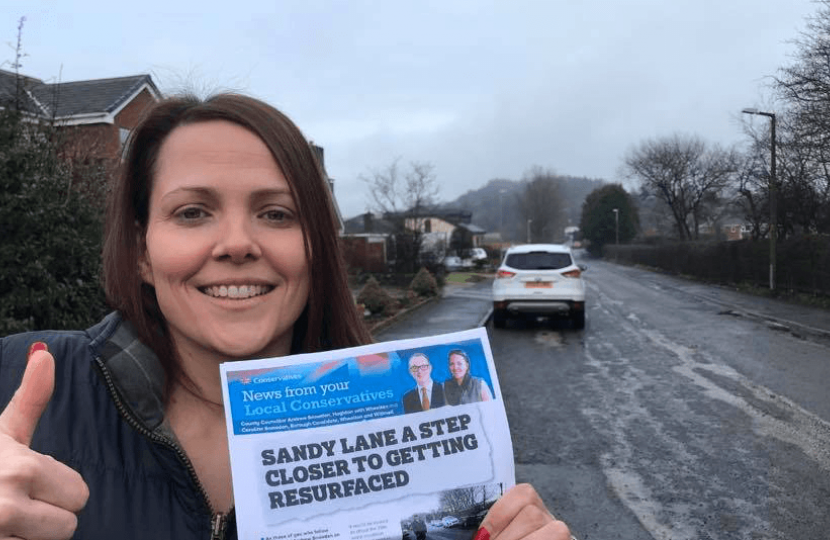 As those of you who follow Caroline and Andrew Snowden on social media will know, getting Sandy Lane resurfaced has been one of their top priorities. This is along with the work they have got done to have some patching-up on Railway Road and Norcross Brow and they are pushing for much more to be done on those roads. Andrew says he is making progress, along with getting scores of other potholes filled in.

Andrew has been successful in getting Highway’s inspectors out to review the condition of the road for inclusion in a capital investment scheme. The previous Labour administration left pretty much no funds for residential road resurfacing in the near future, following their cuts to highways budget.

Andrew Snowden said "I am pleased that I have got the highway inspectors to review the state of the road. An indicative assessment is that it would be ranked as about the 79th worst condition residential road in Lancashire. Given there are thousands of roads in Lancashire - i think this reflects how bad the road is and also how wrong the last Labour administration were to cut highways budgets. I am proud to be part of the new Administration, which is starting to put this right".

Luckily for residents the Conservatives won control of County Hall and have already put an extra £5 million into the highways budget, £2 million for pothole and other defect repairs and £3million for resurfacing, which will cover upto about the worst 50 roads, but the final details of that are still being worked on. Andrew is pushing for that £3 million investment to be repeated because if it is, it looks like Sandy Lane would potentially qualify for complete resurfacing.

Caroline Snowden said "I see the difference that Andrew is able to make for our community now we have a Conservative County Council that is investing in our priorities like highways, unlike here in Chorley where the fixation is on the Market Walk fiasco. I will keep supporting him in his efforts to get Sandy Lane resurfaced and i have every confidence he will get it done".

Your views really matter to us

Sign up for more news from Andrew, Caroline and the Conservatives